A widespread species which is found in upland and lowland areas in a wide variety of ponds and smaller aquatic habitats like water troughs . It readily migrates and is often one of the first species of water boatman to colonise new habitats, including temporary ones. The bug overwinters as an adult and there are two, possibly three, generations per year. 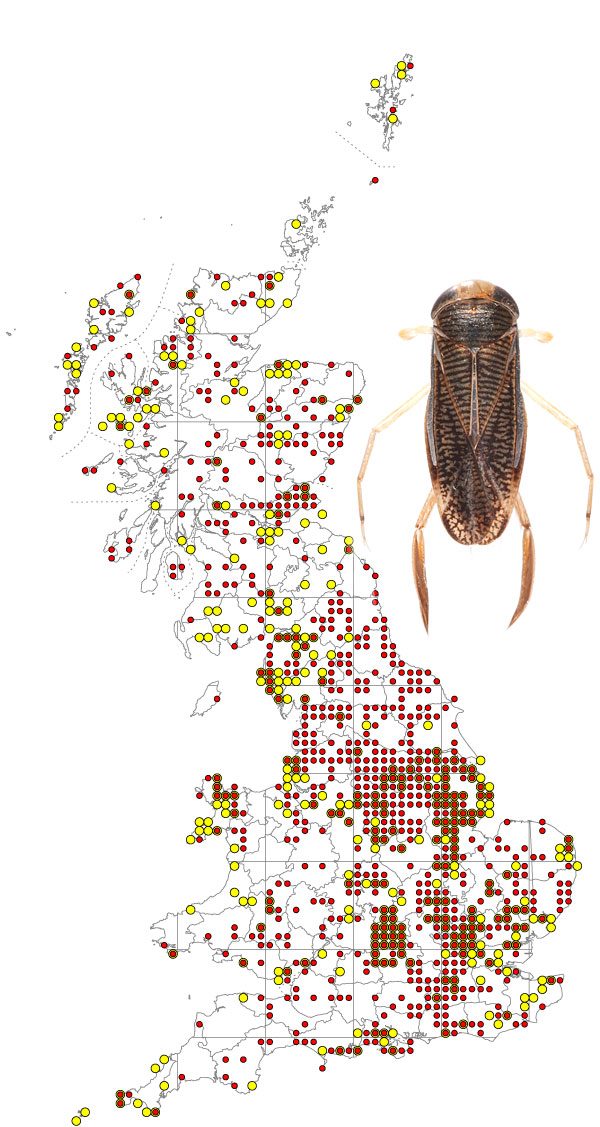 The map is based on records from NBN Gateway, with yellow dots showing pre 1990 records, reds dots 1990 – 2015 records and red on yellow dots overlapping records.

Although many species of Sigara may look similar at first glance, a combination of the following characters will generally be sufficient for the identification of most species: the length, the number of pale lines on the pronotum (and sometimes the shape of the pronotum) the pattern of dark and light lines on the forewing, the structure of the male pala and the shape of the metasternal xiphus. Other characters are important in some species, for instance the presence of dark marks on the hind tibia and tarsus or a depression on the face of the male. S. nigrolineata is one of the smaller species of the genus, length 5.0 – 6.5 mm, with 7-9 pale lines on the pronotum, a pala with a single row of pegs and a more or less triangular xiphus (see below). The male of S. nigrolineata has a facial depression below a transverse keel (or ridge) that is level with the bottom of the eyes.