The Aquatic Heteroptera Recording Scheme covers all species of aquatic and semi-aquatic bugs found in the UK. The species are divided into four major groups, as outlined below. Pictures are not to scale.

One species in this group, the marine bug, lives on rocky shores on the west coast of Britain and for much of the time is submerged by seawater. It can be found among rocks at low tide – but, according to one author, the collector will require a crow-bar! The other species are known as shore bugs and live mainly on the margins of freshwater habitats such as rivers and lakes or on the exposed mud of saltmarshes. Some species are common and can be readily seen running about on mud surfaces. All are predators of small invertebrates. There are two families: 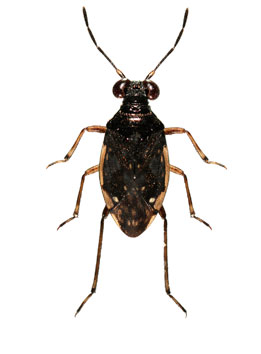 A small group (3 species) of very small and difficult to find bugs (1-2mm) that live among moss and leaves in damp places. There are two families:

A group of predatory semi-aquatic bugs, sometimes referred to as ‘skaters’, that live on the water surface or in vegetation at margins of freshwater habitats. The habit of walking or swimming rapidly over the surface of ponds and lakes is made possible by a covering of fine water repellant hairs over the body and legs, which allows the weight of the insect to be supported by the surface tension of the water. The dense covering of hairs gives these bugs a matt or velvety apperance.  There are five families of ‘skaters’ in the UK:

The aquatic bugs include the familiar water botamen and the larger species of water bugs such as the saucer bug (Ilyocoris cimicoides) and the water scorpion (Nepa cinerea). The Corixidae (lesser water boatmen) is the largest family of water bugs and, unlike other families in the group, are predominantly plant feeders. The larger back-swimming waterboatmen (Notonecta spp) and the saucer bug can inflict painful ‘bites’ with their stout rostrums, which are normally used to pierce the bodies of their prey. There are six families in the Nepomorpha: