Gerris lacustris, known as the common pondskater, is one of the most widely distributed British bugs and occurs in a range of habitats including ponds, ditches, lakes and the backwaters of rivers and streams. A Norwegian study (Coulianos at al 2008) found that G. lacustris is mainly a lowland species, although it can be found at higher altitudes, with a preference for lakes with warmer water temperatures, an abundant growth of emergent plants, little wave action, high concentrations of calcium and magnesium and high water colour. It avoids shorelines with stony substrates, little vegetation and stronger wave action. Savage (1989) in his summary of the habitat preference in the UK suggests that G. lacustris has a greater preference for ponds over lakes and occurs in habitats with moderate plant cover and/or organic matter content. 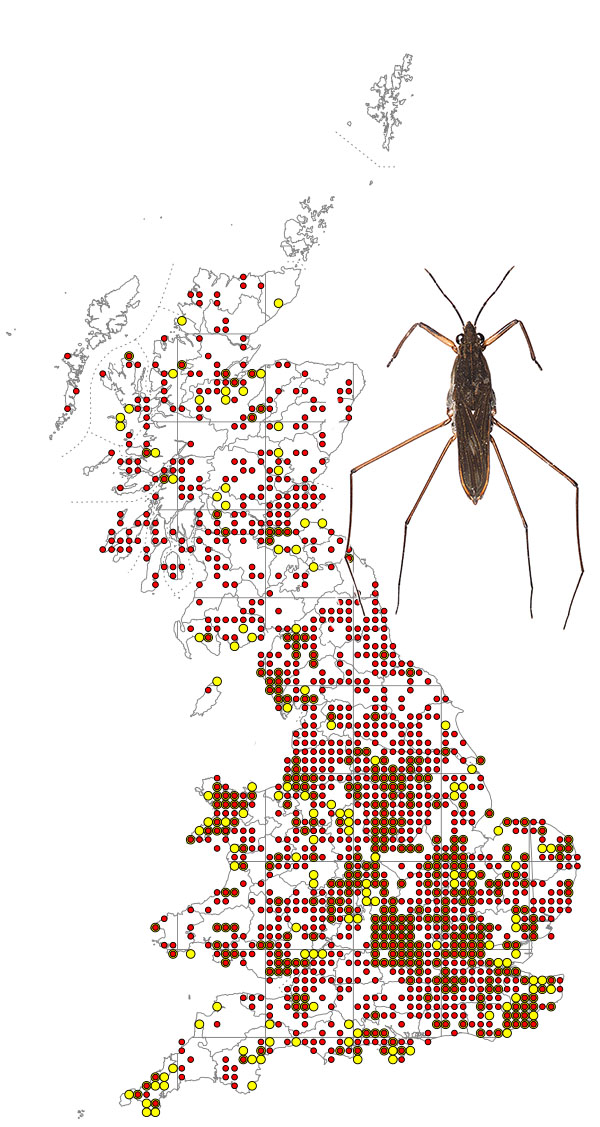 The map is based on records from NBN Gateway, with yellow dots showing pre 1990 records, reds dots 1990 – 2015 records and red on yellow dots overlapping records. G. lacustris is widely distributed in Ireland.

Gerris lacustris is 8.0-10.0mm in length with a black pronotum and antennae. The front femur is pale yellow with black stripes stretching back from the distal end, the dorsal stripe being longer than the ventral (see pictures below). The female has a pale band down the underside of the abdomen, although not always as well marked as in picture below. Somewhat similar looking species are G. gibbifer and G. odontogaster